Alpaca and lama, the differences :

Alpacas are animals belonging to the camelidae family. It measures on average between 90 and 100 cm. It is entirely covered with wool and is characterized by its straight ears, pointed like a spearhead, with a rather rounded back. He also has a long neck and two toes with two foot pads and two nails. It looks more like a long-necked sheep, or of course a llama. Moreover, it is constantly confused with the latter when it is much smaller. Among its distant cousins are the camel, the dromedary, and the guanaco. Alpacas weigh about 80 kg and are between 75 and 1 m long. It is available in 22 natural colours. The lifespan of an alpaca is generally 20 years.
THE STORY 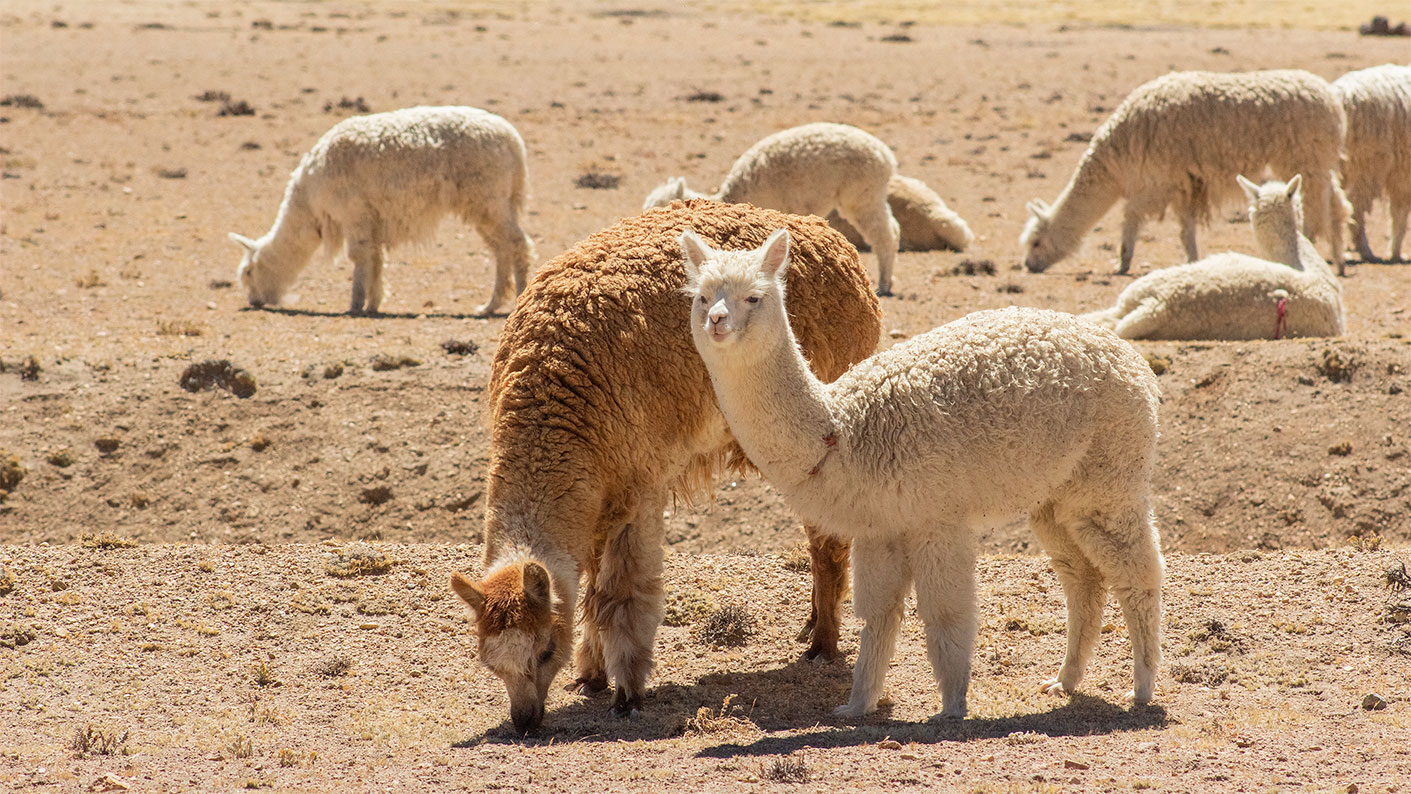 The variety of colours of the llama fleece is very wide, ranging from white to black, beige to dark brown, and is rarely uniform, often with spots on it.
It is the largest of the 4 Andean camelids and can have a size of 1 to 1.25 metres at the withers, weighing 110 to 170 kg.
It is the largest and most robust of the 4 Andean camelids, which makes it an excellent loader.
Like the llama, the variety of colours of alpaca fleece is very wide, ranging from white to black, beige to dark brown, but is generally more uniform.
It is small in size, from 0.75 to 0.95 meters at the withers, weighing from 55 to 90Kg. He is bred for his wool.
Physical description of alpaca:
First mowing at 12 months and one mowing per year
Peru, Bolivia, Chile, and Argentina now have several million alpacas. This animal is used to mountain life and arid living conditions. It lives up to 4,880 metres above sea level.
Some people breed alpacas mainly for their wool and meat. It is important to know that in Peru, alpaca is the main means of subsistence for many families.
Related to the vicuna and domesticated by man for more than 5000 years, it is the animal that produces a fibre seven times warmer than that of the sheep, nicknamed the fibre of the gods or the gold of the Andes which was first reserved for the Inca nobility.
Alpacas are very intelligent and kind, they are also raised as recreational animals.
There are two types of alpacas, on one side we have Huacaya alpaca and on the other side Suri alpaca. They differ mainly in their fleece. 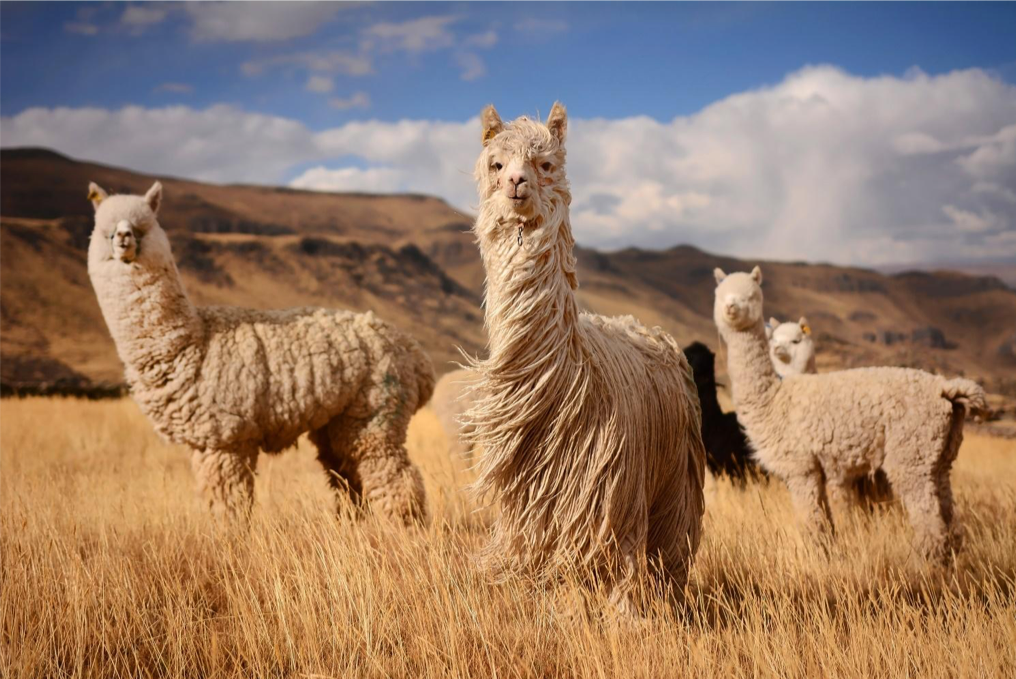 FOOD
First of all, it should be noted that alpacas are "ecological" animals because their breeding produces very few greenhouse gases.
Both alpacas and llamas have a three-pocketed stomach, they are animals that ruminate. The needs of alpacas vary according to their height, weight, and physiological stage. There are five main stages: growth, maintenance, labour stage, and for females alone, gestation, and lactation stage.
What is maintenance? This is the stage where alpacas are adults, but do not perform any activities. During this stage, they do not require overfeeding because their needs are not very high.
During the growth stage, alpacas' dietary requirements are twice as high as during the maintenance stage so that they can develop well.
If alpacas have to carry loads and walk for a long time, the energy requirements of hiking alpacas, for example, can be up to three times higher than at the maintenance stage.
A female at the beginning of her gestation stage does not necessarily require super high food requirements. These increase at the end of gestation and are even higher during the lactation stage. It is therefore important to feed alpacas according to their stage and therefore their energy needs.
On average, alpacas consume between 1.5 to 2 kg of food per day.
But what do they really eat?
The staple foods are hay and grass, most often green or dry plants. Alpacas also feed on grain or granules rather than on protein-rich grains or granules. In addition, they prefer wetter places or meadows for food. It is important to know that alpaca is an ecological animal, unlike the goat, it does not pull out the grass, but cuts it with its four teeth without uprooting it, so the grass can grow back. Alpacas only cut what they need. Since they do not have hooves, their pastures are also less damaged.
It is important to provide alpacas with clean water every day so that they do not become dehydrated.
ALPAGA OR ALPACA ?
The word 'alpaca' comes from the indigenous Quetchua language spoken in various provinces of Peru, Colombia, Ecuador, or northern Chile.
The word alpaca is written either with a C or a G depending on the language. In German and Dutch, it's ALPAKA!
For the curious who wonder why on the labels of alpaca clothing, the word alpaca is written with a C, it should be known that this is an English translation of alpaca.
BEHAVIOR
Alpacas are gentle and very sociable herdsmen, they get along well with other animals, but they prefer their fellow animals. It is a gregarious animal, it needs to be in a group by living in a hierarchical atmosphere. The male is the one who will protect the group from the outside while the female is the one who will dominate within the family. 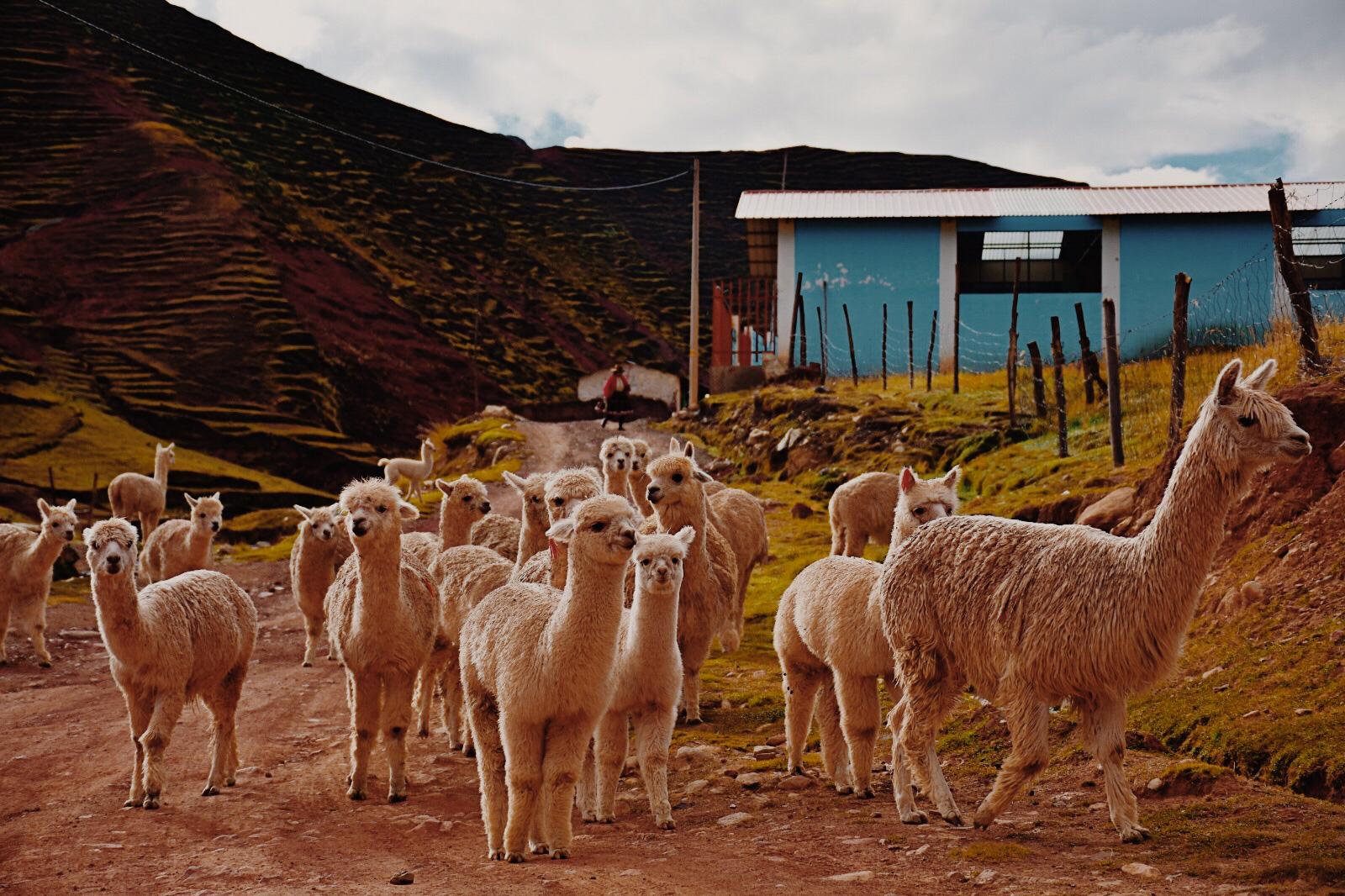 The male alpaca is very suspicious of other males, known as potential competitors. It is, therefore, better to separate females from males to avoid possible conflicts.
The alpaca emits very discreet sounds, similar to those of the llama and the fox, it grinds. Alpacas spit, yet they only do so if they want to establish a hierarchy within the herd and when they are angry. They're never going to spit on man for no reason. This could happen if and only if we bother them, so don't panic!
Alpacas live in herds and are supervised by humans, and alpaca breeders are called Alpagueros. These small animals have nothing to fear, although they have predators such as coyotes, pumas, and ocelots. Alpacas being very calm and soft are used more and more in animal therapy!
REPRODUCTION
Alpacas reproduce all year round. Ovulation is induced by mating. The gestation period lasts between 242 and 345 days. The female can therefore only carry one calf per year. And to complicate the task, the llama and alpaca can reproduce between them; the fruit of this breeding is the huarizo. This one does not offer much interest to breeders because it no longer has the robustness to take on the loads like the llama, and its wool has lost the qualities of alpaca. 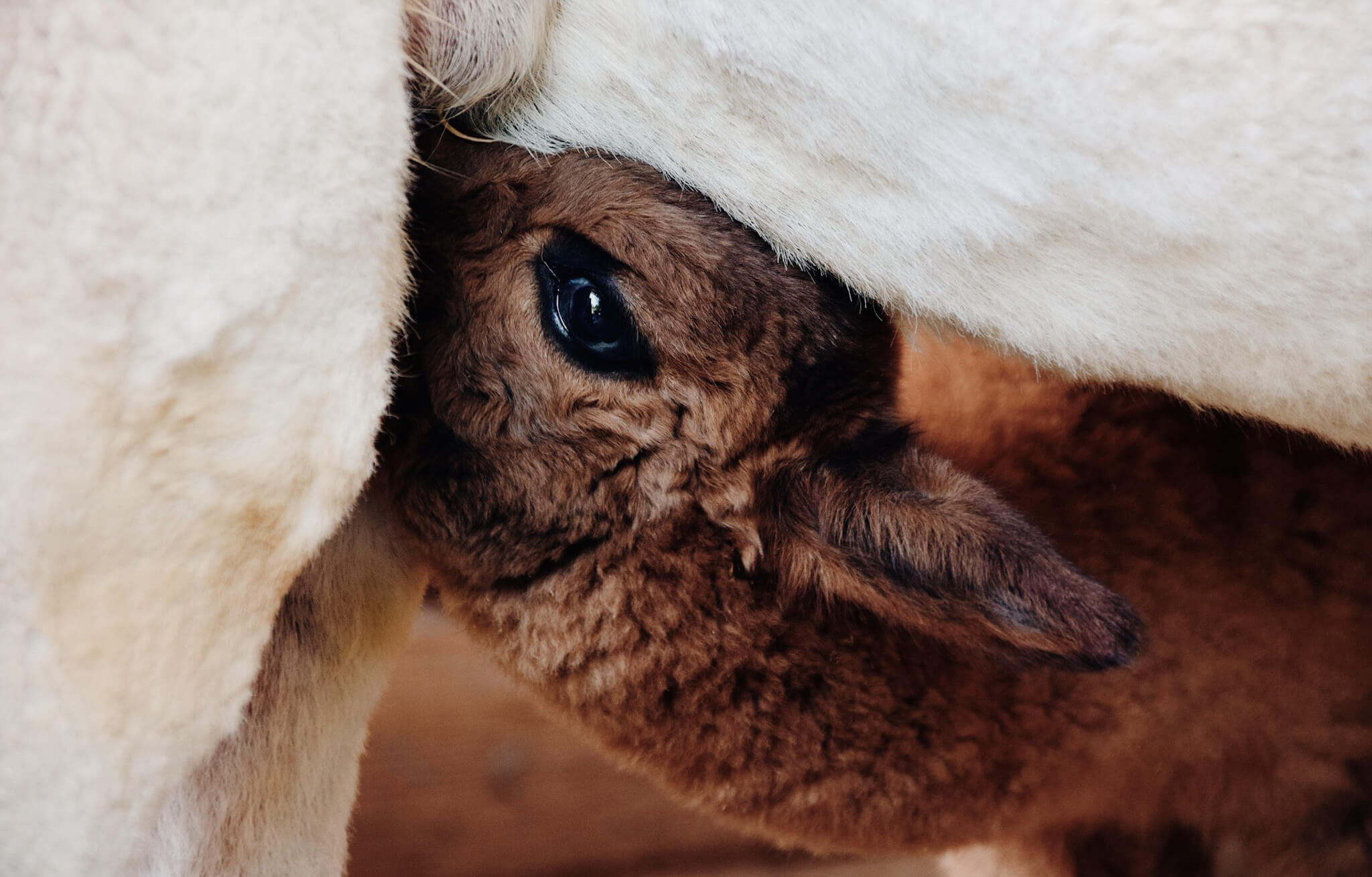 ALPACA WOOL
Alpaca fibre is "ecological" since it requires no chemical treatment, no bleaching or dyeing.
Alpacas experience very large temperature differences during the same day, which explains the development of a fleece composed of particularly thermoregulatory fibres.
To date, there are different types of wool. We find alpaca, baby alpaca, and royal alpaca fibre. The fibres are sorted to keep only the softest ones. Just note that "baby alpaca" wool remains the softest.
Alpaca fibre in general is considered worldwide as luxury wool because of its unique properties such as its softness, strength, hypoallergenic fibres, the very high thermal effect, and lightweight. The fibre is elastic and strong, but also straighter and silkier than sheep.

Alpaca is shaved once a year during spring. Mostly for wool, but also to allow for the escape of heat and stress. The shearing of an alpaca produces up to three kg of wool and lasts about 30 minutes. The first shave will produce between 1.5 to 2 kg of "Baby Alpaca" fibre, while the later shavings will produce up to 3 kg of "Alpaca" fibre. Alpaca fibre is classified according to its diameter: Alpaca, Baby Alpaca and Royal Alpaca. The diameter of the "Alpaca" fibre is 23.1 - 26.5 microns, that of the "Baby Alpaca" fibre is about 14 - 23 microns while the "Royal Alpaca" is the result of the selection of the best and finest Baby Alpaca fibres, whose diameter can go down to 12 microns. By way of comparison, the diameter of a hair is about 60 microns.
The Alpacas that produce this fibre evolve freely, raised in their natural habitat where they can feed in complete peace of mind. The fur products we offer come from animals that have died of natural causes.
Alpaca wool is evaluated according to different criteria, starting with fineness, shine and density, and ending with horsehair, length, and uniformity. Dense, uniform wool is highly appreciated for its length, hair, and colour. But also a wool with a shiny appearance.
To obtain wool of superior quality, it will be necessary to choose fibres with a low micronage, i.e. a very fine wool.
CAMELID COMPETITION
Since 1997, competitions for small camelids have been regularly organized in some European countries such as France, Belgium, and Italy. It is a time of meeting between breeders of these small animals.
Alpacas participate in several events and are judged not only on their pace and movement but also on their ability to avoid obstacles. There is also a progeny competition where the ability to transmit positive traits is assessed by comparing the progeny. The manageability of the animals is also evaluated as well as the agreement between the leader and the animal. The competitions are different for young people and for already more assertive animals.
ALPACA vs. LlAMA
As said at the beginning, many people who see an alpaca scream LLAMA! Let's see which points differentiate them the most.
First of all, llamas are much taller and larger than alpacas, they are about 150 cm long compared to a maximum of 100 cm for alpacas.
The snout of the llama is longer than that of alpaca, it has a less hairy forehead, a longer neck, but it also has more rounded ears.
Llamas are often used to transport loads over long distances, unlike alpacas, which are bred mainly for wool, which is highly regarded throughout the world. They are also much stronger and know how to take care of themselves.
The personality of the lamas is also what differentiates them, they are very confident and courageous. They are also said to be arrogant. As for alpacas, they are shy, very gentle animals and much smarter and more curious than llamas.