Alpaca's natural fibres are considered top-of-the-range, of very high quality and with an unparalleled softness. Alpaca wool is 7 times more resistant than sheep's wool and has an uncontrollable thermal insulation capacity. Let's start with a little history. The term "wool" is often used to describe the fibres produced by the different sheep breeds. It is also used to talk about fibres produced by other animal species, but then a qualification is added to distinguish them:

In the table below you will find a classification of the world's best fibres approximately.

Among the different types of Alpaca fibres, BellePaga has chosen to enhance the fine, soft and silky character of the Baby Alpaca. 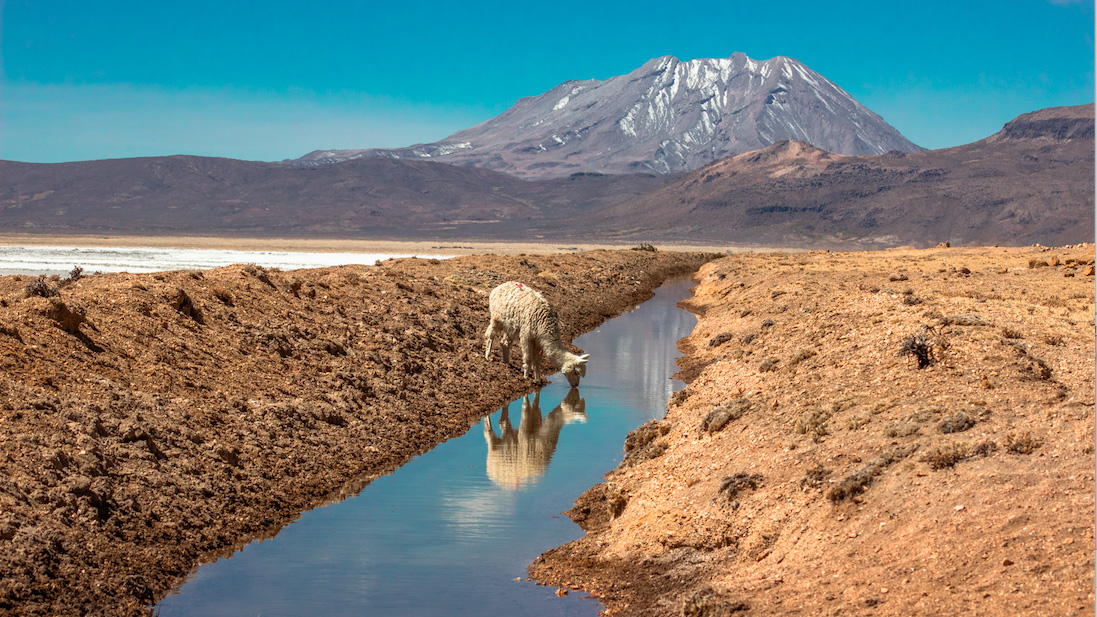 Alpacas are small camelids from the Andes Cordilleras, mainly from Peru, Chile and Bolivia, and they are the ones who produce the famous "alpaca wool". They evolve in the wild at an altitude of more than 5000 m where temperatures range from -20°C at night to +30°C during the day. There are two Alpaca varieties: the Huacayo and the Suri. About 90% of the Alpaca population in Peru is Huacayo. Its shape gives it an elegant appearance and it is a variety that offers a wider range of natural shades. Huacayo Alpaca has a denser "coat", the wool is soft, shiny and fine. Alpaca Suri has a long "coat", but the fibre is fine and silky.

Alpaca wool is classified according to its diameter: Alpaca, Baby Alpaca and Royal Alpaca.

The Alpacas that produce this fibre develop freely, grown up in their natural environment, where they can feed themselves with peace of mind.

As you will have understood, Alpaca wool is a natural fibre, "the most prestigious in the world" because it has many unique properties.

Alpaca wool is clearly distinguished by its insulating effect, which is 7 times higher than that of sheep's wool, and by its unparalleled softness, which is close to that of cashmere wool. So this wool protects you much better against the cold, gently, without ever letting you sweat thanks to its thermoregulatory properties.

It is also incredibly light, comfortable to wear and respects the most sensitive skin. These are the reasons why NASA equipped its astronauts with alpaca clothing at the beginning of the conquest of space.

Alpaca wool is ideal to wear in the winter, in the half season, or for hiking, winter sports,....

Alpaca wool has a high resistance and does not bulge. This allows you to extend the life of your clothing and accessories. You can keep them in good condition for much longer.

It is also important to note that there are almost 22 colours in alpacas. But for marketing purposes we can group 6 of them: dark brown, light brown, black, grey, beige and ecru. These are colours that fit everywhere and blend well together.

Alpaca wool does not contain "mucus" and is therefore called "dry". It therefore loses very little weight when it is washed, which is not unimportant!

Differences between Wool and Hair

The hair is a fiber that contains an important medullary space in the middle, which is covered with a shell known as the dandruff layer. Wool, on the other hand, contains no marrow or very small channels and remains finer.

Let's not forget some of the characteristics of alpaca wool:

o The hook and the chandelier:

It should be noted that the outer sheath of the fibre, the "cuticle", has scales. There are two ways to see if the wool has "hook" or "shine". If the scale is bent outwards, this means that there is a good harmony of fibres between the scales. In this case it is said that wool has a hook that makes it easier to spin and soften. If, on the other hand, the scales are bent inwards, the wool is considered "shiny". It will look brighter and more reflective. (For the record, the hair has more shine, and the wool has more hooks.)

The diameter of the fiber is measured in microns (1 meter divided by 1 million) and determines the fineness of a fleece. To determine the exact value, you only need to perform a complete fiber analysis.  But by observing and comparing you have a good estimate!

Over time, the fiber becomes "coarser". A Cria (baby alpaca) can start at 20 microns and at the age of 5 years at 24 microns for example.

The density of the fleece corresponds to the amount of fibre per cm2. It can be controlled manually by spreading the wool over the alpaca.

Covering the animal is also important. It corresponds to the amount of wool on the head and legs of the animal. The weight of the coat of this small camel depends on the density and the cover.

The curl refers to the "natural curl" of each fiber, it is an English term. We can also speak of "crawling", which means "waving".

It makes it possible to give the fibre flexibility, "elasticity". This ensures that the body does not stretch too much. It can be easily seen with the naked eye by opening the fibres on the coat.

Feel free to enter the universe of BellePaga, which will immerse you in the sweetness. With all the items in our online store you can take advantage of all these benefits, visit our website without further delay!