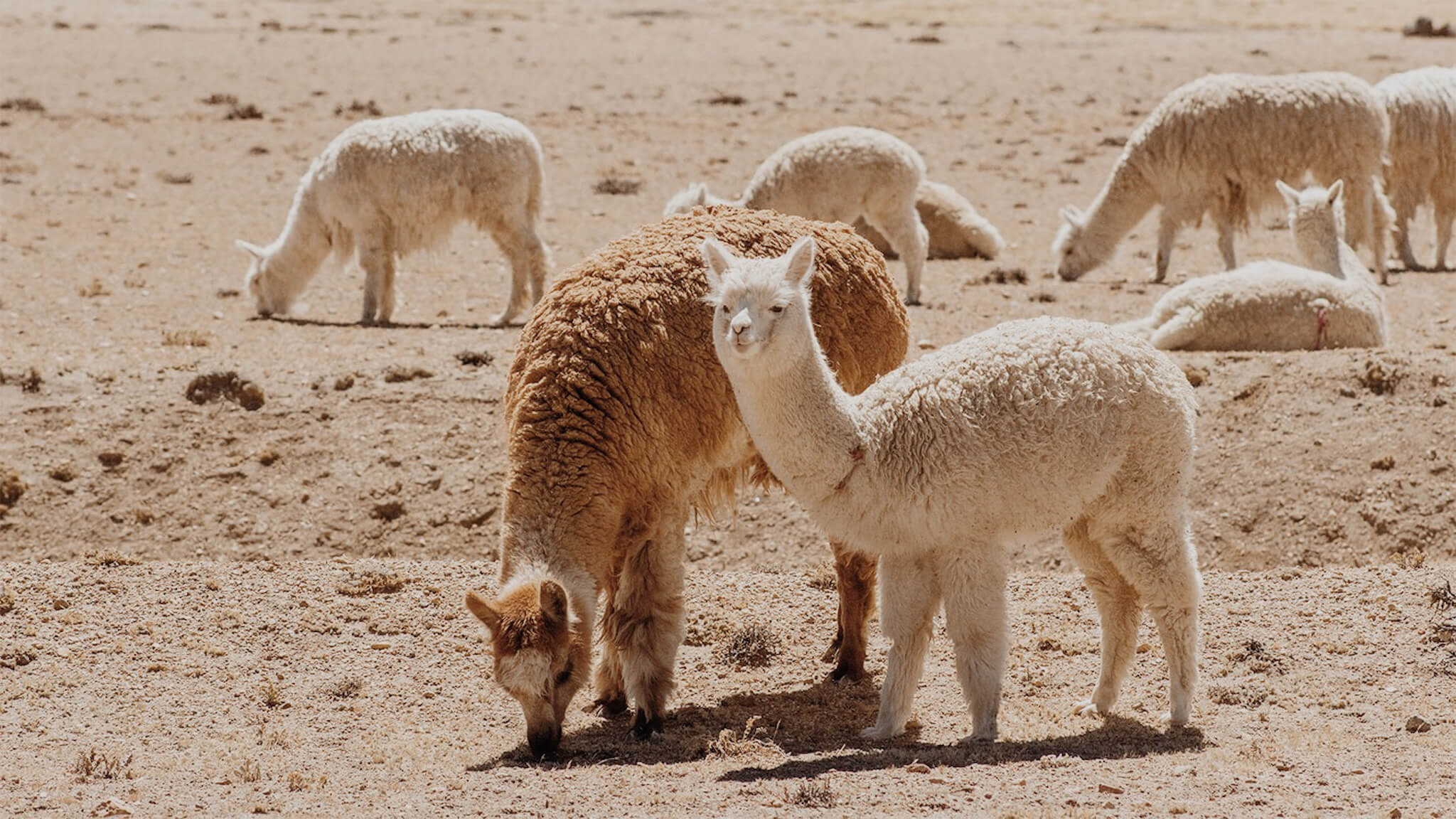 Alpacas and Llamas are cousins and often confused many people. And yet, although they belong to the same family and live in the same regions, they are very different. They each have their own characteristics that are very interesting.
Here are the details that will help you avoid confusing them.


Differences between Alpaca vs Llama 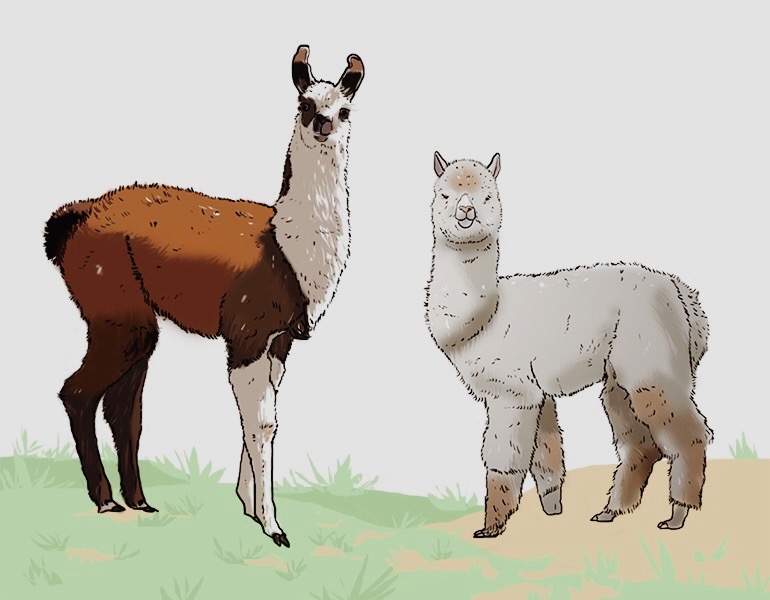 The llama differs from the alpaca in size. It is the largest of the 4 Andean camelids and can measure up to 1 to 1.25 metres at the withers, weighing 110 to 170 kg. The silhouette of the llama gives an impression of "square" because of its flat back, while that of the alpaca is all "rounded" because of the more rounded shape of its back and head.
In South America, the llama is mainly used to transport loads because of its strength (including alpaca fiber!) while alpaca is used to produce fiber for clothing. The llama is about twice the size of an alpaca. Alpacas are small in size; from 0.75 to 0.95 metres at the withers, weighing 55 to 90 kg.
Head
The snout of the llama is significantly longer than that of alpaca. Moreover, his forehead is devoid of facial fleece, while the alpaca's is covered with an abundant fleece that can even partially cover his eyes. This characteristic gives it a rather nice look!

The ears of the llama look like a horseshoe, while those of alpaca looks like a spearhead. Alpacas have slightly more pointed and shorter ears.

People tend to say that the common feature that characterizes them is the importance of their social relationships. Indeed, their behaviour is based on the social structure of the herd and they generally do not like to be alone at the risk of depression.
Note that the male is responsible for protecting the group from the outside, but it is the females that dominate within the family. The male has difficulty accepting the presence of other potentially competing males.
Contrary to what one might think, llamas and alpacas are very discreet. The sounds they emit often surprise visitors with their silence and serenity.
They are born environmentalists and hard workers. When they walk, the pads under their legs do not crush the grass but only flatten it without destroying it. And when they eat, their teeth cuts the grass, but do not pull it out.
As for the question "do they spit? " the answer is: if they are bothered, just like your own reaction. In reality, they are endearing and fearful animals. Therefore, they will spit on you if and only if you approach them too close and annoy them. In other words, it's a simple way to protect themselves for them.
As for alpacas, it is good to know that they are calm, peaceful, lively, curious, and predictable animals. They are gentle with other animals and children. It is a gregarious animal that needs the company of its own. Alpacas are clean and do all their needs in one or two places just like llamas. They travel in groups when they are frightened or worried. We also remain admiring of their speed of learning. 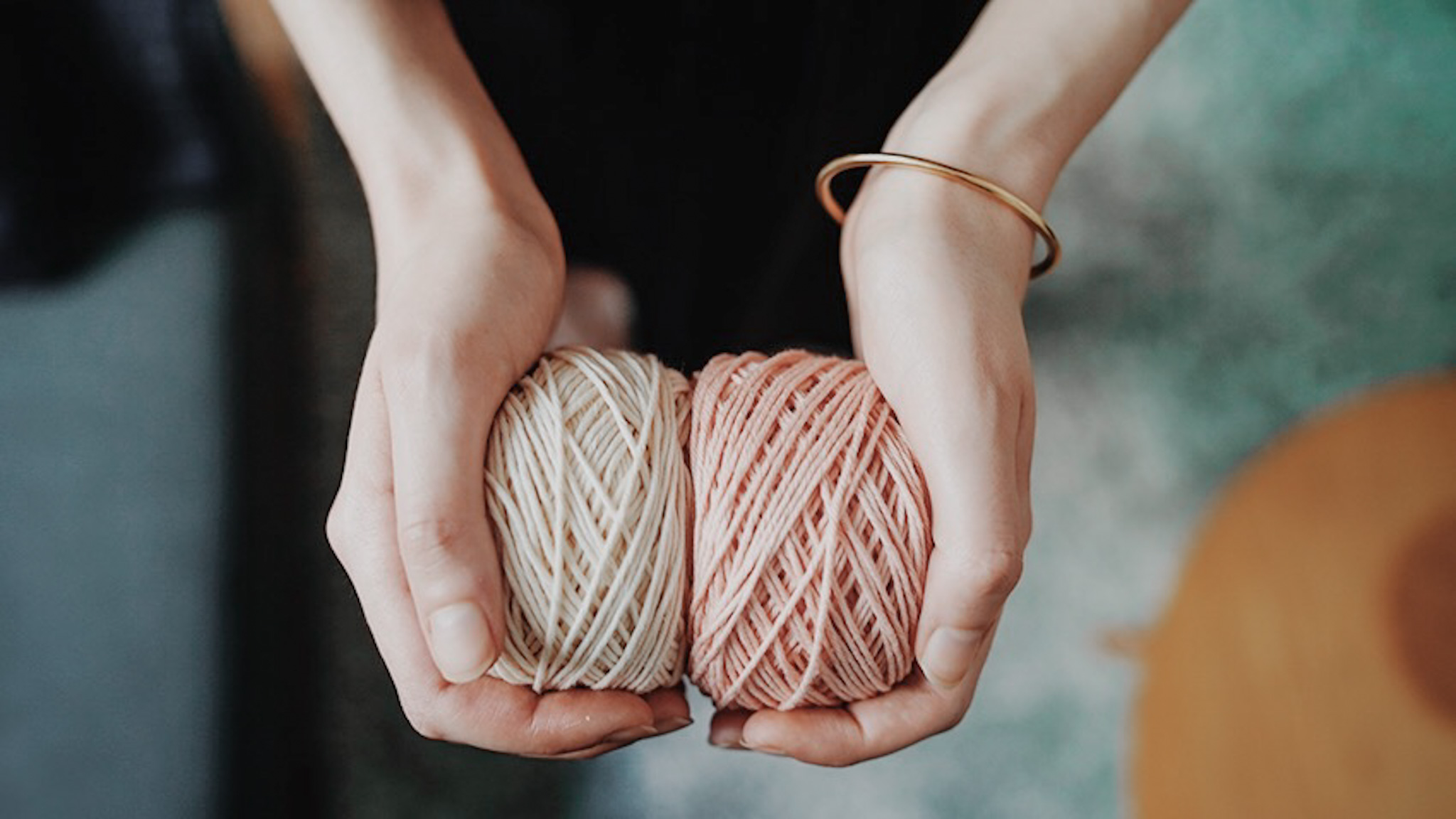 Both llamas and alpacas produce wool, but the llama's wool is less commonly used because its properties are not as interesting as those of the alpaca, which makes it so unique. The alpaca is known for the exceptional quality of its wool, which is one of the softest, finest and most sought-after in the world.
The variety of colours of the llama fleece is very wide, ranging from white to black, beige to dark brown, and is rarely uniform, often with spots on it.
Like the llama, the variety of colours of alpaca fleece is very wide, ranging from white to black, beige to dark brown, but is generally more uniform. It has very fine, soft, resistant and dense wool. It does not contain rough fibers and therefore it does not itch. They have more than 20 natural colours that do not require a shade. As you will have understood, alpaca is a pure wonder of nature.
This animal from the Andes Mountains continues to leave us speechless with its incredible characteristics:
1)      Unsurpassed softness and durability
Due to its cellular composition, the structure of Alpaca wool fibers makes the production of clothing more durable and highly resistant to washing processes. Alpaca fiber is extremely soft. It can be worn on the skin, even by people with the most sensitive skin.
2)      Heat associated with lightness
Alpaca fiber contains a large central channel filled with air, the "double glazing" principle, which gives it exceptional thermal properties. This characteristic, combined with the small diameter of the fibre (12 and 32 microns), makes it very light, and therefore very comfortable to wear.
3)      Temperature control
Alpaca is subject to very wide temperature variations ranging from -25 to +25 °C on the same day. Its natural fiber, adapted to these high-temperature differences, absorbs ambient humidity, ensuring that you always have an adequate degree of heat without ever sweating.
4)      Hypoallergenic
Alpaca wool, known as "dry" wool, does not produce "ooze", and therefore does not contain lanolin, a substance responsible for allergies.
After mowing, washing the Alpaca fleece does not require any chemical treatment.
5)      Does not pill
Unlike other wools, Alpaca fibre does not pill.
6)      Resistance
Alpaca fiber is extremely resistant and elastic.
This allows you to keep your clothes and accessories in perfect condition for many years.
7)      Odourless
Alpaca fiber does not emit any odours when wet.
8)      Fireproof
Unlike the vast majority of synthetic fibers and some natural fibers, Alpaca fibre is a non-inflammable material.
Note: Even more comfortable to wear, Baby Alpaca wool is in great demand. This name Baby Alpaca is a reference used for the classification of fibers according to thickness. It comes from the first shearing of the young animal. Then, when the hair grows back, it is thicker and loses the "Baby" qualification.

Alpaca, llama, guanaco, vicuna... Once revered by the Incas, these species are not always easy to identify. Although the llama remains the most famous of them (thanks to Captain Haddock!), it is not always easy to distinguish them. For an uninformed public, it is easy to confuse llama and alpaca, so here are some criteria to remedy this. 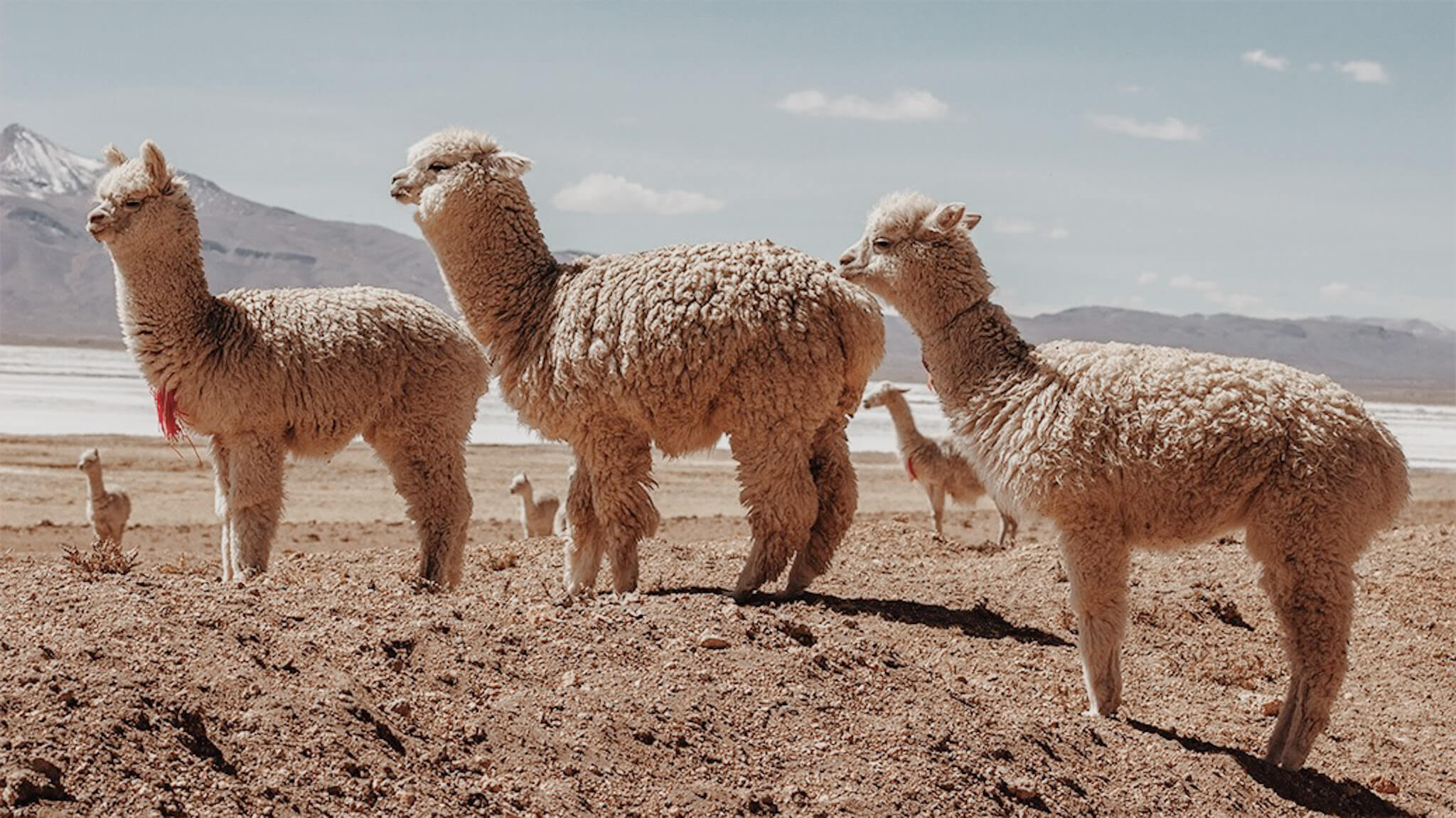 It is good to know that these two species evolve in their natural environment at an altitude of more than 4000-5000 m. They are both raised in herds and domesticated. Genetically speaking and although they have been crossed in the past, alpacas and llamas do not have the same ancestor. The llama (= guanaco) and alpaca (= vicuna), i. e. guanaco and vicuna evolve in the wild.
However, it is true that there is a kind of hybrid called "huarizo", which, because of common genetic compatibility, is in fact a cross between a male llama and a female alpaca. This makes it often impossible to distinguish between the two. Note that these two camelids are also used for food (meat).

In short, both alpacas and llamas belong to the same family, as do guanaco and vicuna, which are their cousins.  They all come from the Andes Mountains in South America. Llamas and alpacas are domesticated while guanaco and vicuna evolve in the wild. The llama is distinguished by its weight, it is larger muscular and can carry heavy loads while the alpaca is a wonderful little animal producing wool considered that you must absolutely try!
It is on the basis of these observations that BellePaga has decided to work with this incredible wool offering you an uncontrollable quality and comfort.